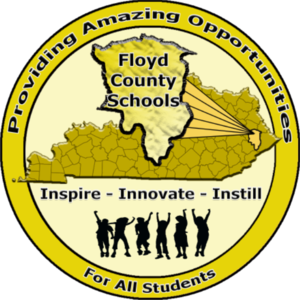 
Adkins comments, “Congratulations State Runner Up for Best Technical Project, Adams Middle School and Coach Amy Newsome, for your project Behind the Mask. Earning this title means that the team competed against other middle school and high school students.”


Coach Newsome said, “My team said that while we’ve worn masks throughout this pandemic, we haven’t been able to show our facial expressions to people. This led students to create a mask that would show emotions or moods.” Newsome says that students, “... used an LED screen that was programmed with an app to show a variety of emotions. They used a piece of mesh and sewed it into a mask, making a pocket for the screen. The person wearing the mask can push a button to show feelings, allowing students to communicate their emotions nonverbally.”


Adkins adds, “In addition to Adams Middle School’s phenomenal success, we have several state champions and several runners up from Duff-Allen Central Elementary and Floyd Central High School. We want to congratulate those students and Coach Ceci Prater on their incredible success in STLP.”


Superintendent Adkins concludes saying, “We’re very proud of our students who competed and won at state, especially as many were doing their projects this year as they were virtually meeting with their coaches. We’re so pleased to know that the pandemic didn’t stand in the way of our students making Floyd County Schools continue to be a standout in STLP. Join us in congratulating these students!”